From this issue on, I will use a format of two categories (1) “whatevahs” (Plural for the Hawaiian Creole word for “whatever”) and (2) “reflections.” As I begin to use this format, breaking news about the environment and man’s ignorance about it interrupts my chain of thought, but I must follow my intuition about this.

The continuing “news” about the Fukushima nuclear tragedy makes it difficult for an advocate of Gaia such as myself to maintain a cool head. I want to keep a balance between good thoughts and cautionary ones, and just as I was preparing to upload my tardy essay, the NY Times came out with an article that reinforces my pessimism about the ability of mankind in general to think carefully about the possible dangers of tampering with Nature itself, to use more common sense when enthusiasm and greed take over their minds. The extreme enthusiasm of nuclear engineers that sustains their belief that they can do little harm to the Earth with their ventures, is now beginning to deminish.

WW 1. Pride in our nuclear wisdom

” American officials had said early on that reactors in the United States would be safe from such disasters [as those at the Fukushima plant] because they were equipped with new, stronger venting systems. But Tokyo Electric Power Company, which runs the plant, now says that Fukushima Daiichi had installed the same vents years ago. “

The end of the article describes a stalemate between advocates of containment isolation, and reactor safety managers. Neither approach seems to involve adequate measures of protection.

We can add to all of this announcements in the news about construction of nuclear facilities in tsunami and earthquake danger zones both in the US and elsewhere, the radioactivity dangers that the Yucca mountain, a sacred place for the Native Americans, poses for anyone approaching it, as well as being a total affront to the wisdom and spirits of the native peoples.

Our attitude seems to be that we can sail our private yachts alongside the vast sea of plastic waste out beyond Hawaii, which kills off birds and fish, and just look the other way. We can sigh with false relief that if solar power is insufficient to solve our energy problems, we can trust the expertise of our nuclear engineers to use uranium and plutonium to solve them.

Actually, I do not feel it is sensible to blame any particular individuals, but rather to shout at the top of my lungs

WHAT THE HELL IS
THE MATTER WITH EVERYBODY?!!!

… like the main character in the 1976 classic film NETWORK, who opens the window of his office and shouts

I CAN’T STAND IT ANYMORE!

(The above article I reported on yesterday is the lead article in this morning’s NY Times. I searched Google News for additional information, but it appears that people are more interested in the news of the man who ate his 75,000th (?) Big Mac yesterday).

This is a poem I wrote when I saw a woman carrying her baby on her back, followed by a poi dog, roaming the countryside to find a spot to rest. I call her “Marva.” The dog is “Ikaika.”

Marva could no longer pay the rent,They doubled it last month,Now a homeless mom,Her homeless baby strapped on her back.And Ikaika, their homeless dogSniffing for lunch.

She tries to make choices.

Needs a rest – just to sit down.Take the weight off her shoulders,Nurture the baby.WAIT! How about over there?No luck – the City Council cut the bus benches in half.

Where do I go?

Not here – bees buzzing in rusty cans.Not there – what’s that stuff in the ditch?Dead flies, oil slick,Not back there – can’t stand the smell.Careful! Smashed beer bottles.

A shady knoll up ahead. Promise!…Black, sticky oil all over the grass.No place to sit, no place to lie down.… and where is Ikaika?

He avoids the glass,Trots onto the road in hot pursuit of lunchJust then, a garbage truck whizzes by.

It crushes him into a furry pancake dog.Oil drips over the fresh roadkill.

II. A Reflection on Beauty

I like to think that “beauty happens.” Not only the creations of artists and musicians, but spontaneous, unpredictable events that reveal much of the beauty awaiting us if we would only look (I said “look” rather than “look for it” since the best surprises come when we proceed from a pristine awareness of the present moment.)

I used to live in a “gentrified neighborhood” which was carefully pruned and mowed periodically to preserve the neatness only humans seem to like. I called the crew of weed whackers, leaf blowers, and hedge trimmers the “Gardeners of Righteousness” (GOR) whose objective is to “make the neighborhood safe for democracy.” In the GOR philosophy, there is no room for the surprise appearance of a renegade flower or bird. Everything is neat, trim and predictable. The haiku poets of Japan and the early Chinese poets would have been treated as illegal aliens and promptly deported to the hinterlands. There would be no surprise like the sound of a frog jumping in a pond, the defiant beauty of the Milky Way seen through a hole eaten in a window panel. The GOR and their supporters would have none of that.

Fortunately, our apartment was right on the edge of an abandoned railroad track and many abandoned buildings and fields –existing right next to the neatly trimmed neighborhood.

Sometimes if we take time out to just look around, we can see the beauty that defies the efforts of construction engineers to blot out.For example, I walked in a nearby abandoned cane field and discovered some morning glories growing on an old cement ditch wall. They somehow called me to their attention. 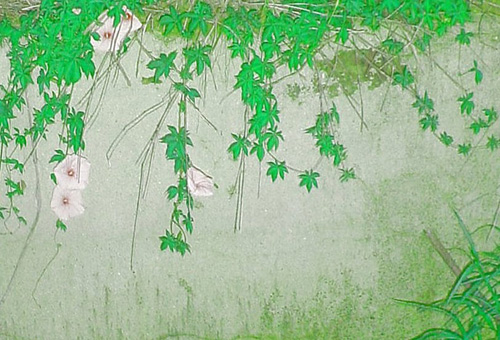 They resemble a kind of “floral calligraphy” radiating a beauty that mainly attracted the frogs and birds passing nearby.

And one day, getting out of my car at a parking lot in Hawaii Kai. I looked up at the mountains nearby and grabbed my camera. The result is a photo that I had to crop to produce a view, a view I wish I could see without obstruction somewhere on this island!Imagine mountains unobstructed by skyscrapers or power lines and towers, farmlands directly in view without any roadside embankments making it impossible to see what is growing.